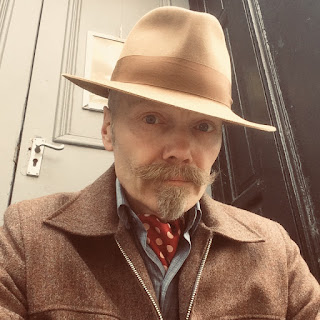 If you want to get a head, get a hat.

Hats are cool, hats are stylish,
hats stop the reflection of the sun from my shiny scalp cause accidents and blindness .
More people should wear hats.

I am often asked about my hats I wear them all the time, trilby, fedora,cap, wooly bobble hat...it doesn't matter, I don't feel dressed with out one, I think a decent hat just sets an outfit off, ads a little bit extra style.

According to the Online Etymology Dictionary, the term "fedora" originated in 1887 from a popular play in which actress Sarah Bernhardt played a headstrong Russian princess named Fédora Romanoff. The name Fedora is derived from the Greek word theodoros, which literally means
"gift of God."

Wearing hats fell out of favour for many reasons some say it was down to JFK going bear headed, I'm not too sure about that, some say it was the rise of the motor car. I think it was just the inevitable downward trend in elegant dressing , and the need for the next generation to abandon the conventions of their fathers.

My favourite couple of hats are the moment, and two Mason fur felt trilby/fedora offerings
from the Susquehana Hat company.
For the money, they are cracking hats, indeed it's amazing the they retail at well under £100, a bargain for a decent fur felt hat. I actually prefer them to a Bates of Jermyn Street I have that retails at close to £300. It isn't a Locks of St James or a Borsalino Avalon, but to my mind its just as dapper. 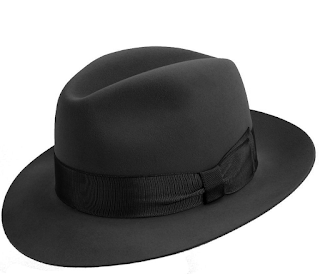 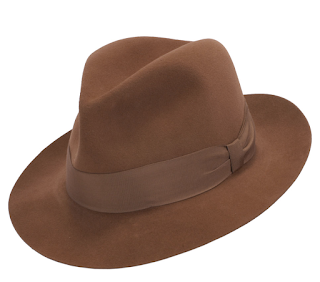 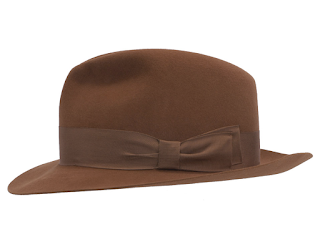 I have the hat in nutmeg brown and grey, I believe it comes in array of some 14 or so colours.
The fit is true to size and the material holds a crease well. It is easily shaped with a bit of steam
from the kettle .
I have it on good authority that people in the company Have been urging the company owner to put the prices up, but he resists.

Nicked from the web site!
Top quality fur felt, fully lined men's trilby hat with a leather inner band.  Manufactured with a soft crown so you can position the crease and pinches exactly as you like them.
Can also be worn with the crown domed if required.

This hat is inspired by the fictional character, Perry Mason, a criminal defence lawyer who was the main character written by Erle Stanley Gardner. Perry Mason was featured in more than 80 and short stories, most of which had a plot involving his client's murder trial. Typically, Mason was able to establish his client's innocence by implicating another character, who then confessed. The character of Perry Mason was portrayed each weekday on a long-running radio series, followed by well-known depictions on film and television, including "television's most successful and longest-running lawyer series" Perry Mason from 1957 to 1966 starring Raymond Burr.  Mason is portrayed as a lawyer who fights hard on behalf of his clients and who enjoys unusual, difficult or nearly-hopeless cases.

If The Susquehana hat company sound familiar, or even if it doesn't watch this... if only for the suits!